1995 At the Midnight Hour (TV movie) (director of photography)

1989 Something in the Walls

1981 Steady as She Goes (documentary short)

1974 The Clinton Special: A Film About the Farm Show 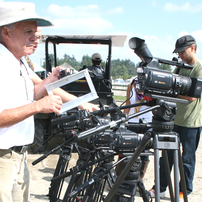 Robert Fresco is an international award-winning film and video director of photography, with a career history that spans virtually all aspects of film and video.  Production film experience ranges from 70mm wide screen theatrical films to 16mm documentaries and music videos.  Video expertise includes broadcast high-definition video, as well as standard professional Betacam and small production formats such as DV, DSLR, and DVCAM.

Director of Photography Credits include:

2015 to 2017  "Life Is A Highway".  A full scale CBC documentary production about my Son Fraser (who is autistic) and his twin Sister Hallee.  The production includes interviews with family and over 20 years of accumulated archival of Hallee and Fraser growing up

2015-2017  'Lyme' an historical documentary about Dr. Ernie Murakami who has been actively researching Lyme disease for over twenty years.  The trials of being an earlier researcher. The life of a Japanese Doctor in British Columbia. (co-production with Wunderman Films)

2014 An "in production" documentary relating to a revolutionary way to eliminate the radioactivity of nuclear waste materials.  Based on accumulated original video for the last two years, with additional videography in production
(A Wunderman Films production)

2014 In production, "Born Into Gangs" a full one hour documentary featuring Andreas Terrazakis, the son of one of Vancouver's most notorious drug lords. In production since 2012 (A Wunderman Films production)

(summer 2014) Several Productions with Infinity Films Vancouver.  Promotional videos for the Coast Health Foundation as well as segments for the 2014 "Courage To Come Back" awards.  (I also shot segments for previous "Courage" awards in 2012 and 2013.

2014 A Music Video for Cole Armour titled 'Original" (see video below).  Other production includes a web page video for the 'Trails Crossing' centre in Hope B.C.

"CANYON WAR" (Summer of 2008).  Video cameraman for a docu-drama with recreations shot on and near the Fraser River which tells the story of the confrontations between native tribes and the hordes of gold seekers who descended on the Fraser Canyon in the mid 1850
(A Wunderman Films production in HD)

"THE CARL STROMQUIST PROJECT"  (2010-2012.)  An on-going documentary project about a BC Native artist schooled in traditional ways, but working with contemporary methods. This documentary features the work, philosophy and lifestyle of this exceptional artist and is currently in production.  Robert Fresco, producer/director, cinematographer, and editor.
(A Real Hope Pictures Production)


“WINTER OLYMPICS HD VIDEO ACQUISITION” (March 2009)
An ongoing contract to shoot full High Definition video for use by the BC Government
in promoting the 2010 winter Olympic games . (an Infinity Films Production)

Video for BC Vista productions and major US stock footage companies

“CONVICTIONS” a half-hour documentary for Vision TV about the work of Rev. Ruth Wright and the 1st United Church’s work with the homeless and disenfranchised street people of Vancouver’s Downtown Eastside.

“CHASING THE TANGO HIGH” (2006) a one-hour music documentary shot on location in Argentina that follows Vancouver Trio “Tangissimo” as they Tango in the land where it all began.
(an Infinity Films Production, Vancouver)

“FIREMOUNTAIN” (2005) PAL digital Betacam. Director of Photography for BBC.  Part of a one- hour series about world disasters, a dramatic re-created docu-drama about the scientists, (some of whom died) during the eruption of Mt. St. Helens.
(A BBC Production re: "Great Disasters of the Twentieth Century)

“72 HOURS” (2003-4).
13 Episodes of a high definition forensic crime series for the CBC (2004)
Director of Photography for Kensington Communications Toronto

U.S. and Canadian Video Production
(Prior to 1999)

(director of photography)
35mm and 16mm film productions as DOP